In October of 2021, I pulled my truck into Patagonia, Arizona for the very first time. I had no real agenda (other than ride bikes, take photos, and sample the local draft list), and no inkling how important this place would soon become in my story. Spotting the liveliest-looking spot in the 1-horse town center, I walked over and was promptly greeted by Heidi Rentz Ault – “Are you here for the Grand Opening?” She was talking about Patagonia Lumber Company, the new bar, music venue, and coffee house cooked up by her and her husband Zander Ault. The doors were due to open for the first time in 1 minute, and by pure luck I became customer number 1. The kind folks at the bar then pulled me an IPA from nearby Tombstone, Arizona.

After a long weekend spent riding in the area, and another kismet coincidence (I snagged a last-minute entry to Heidi and Zander’s gravel race, the Spirit World 100, and hit the rolling ranch roads of Patagonia for my first ever bike race), I knew this area was something special in the world. I brought my friends up to speed; Colin Rex, Christian Van Os Keuls, and Jonny Morsicato are my partners in adventure and business at Coyote, and we called up Ventum Racing to loop in their adventure gravel bike, the GS1.

With Justin Diamond (creative lead at Ventum and former professional bike racer) onboard, the plan was set: come back in January 2022 to spend 72 hours in Patagonia, Arizona, making every minute count. We’d ride some of the world’s finest gravel, interact with the locals, find the best restaurants in the area, and dig into what makes the San Rafael Valley so singularly incredible. 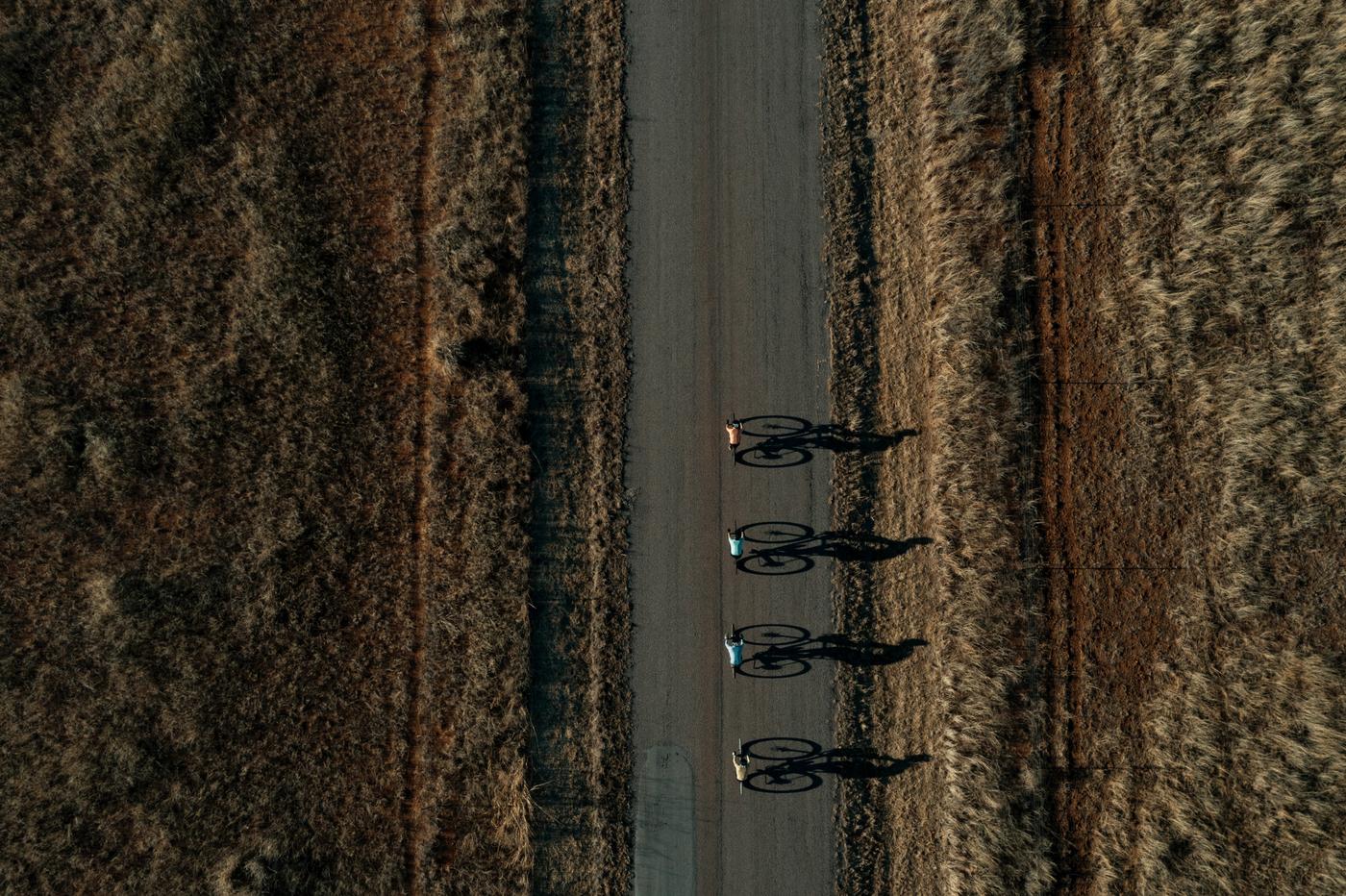 With only 3 days, there was no time to waste, so we unloaded our gear at the Gravel House, Heidi and Zander’s perfectly appointed Airbnb listing, and headed to the Patagonia Lumber Co. for a reunion with friends and some live music. PLC, as it’s affectionately called, is the area hub for cyclists, and the place to go for pre-ride route beta and post-ride libations. While a local Grateful Dead cover band serenaded us, we picked Zander’s brain for some off-the-beaten-path route suggestions and spots to take in the views of Mexico. 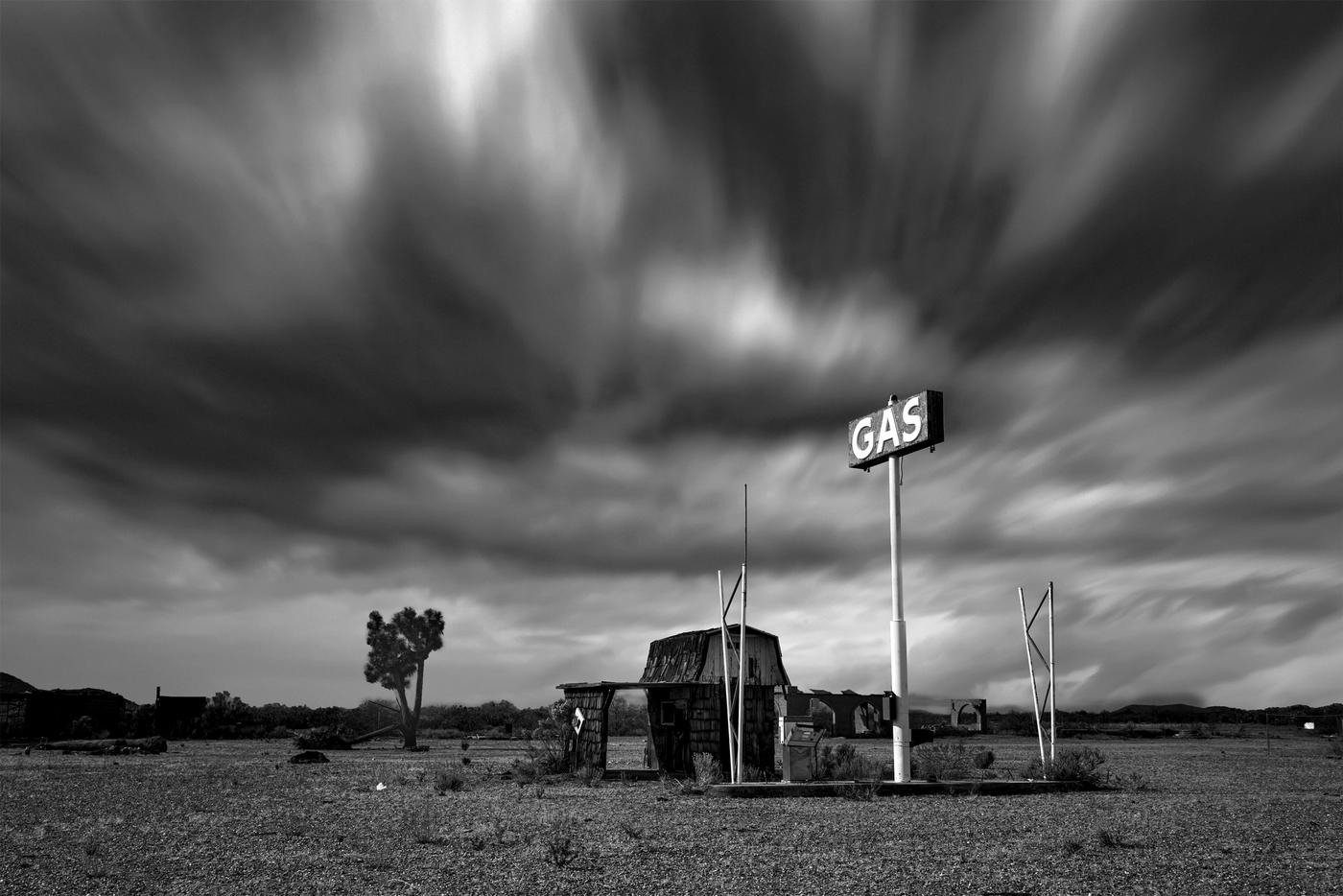 Patagonia is nestled 18 short miles north of the Mexican border, in the heart of the desert Southwest, and the smattering of towns in the valley are suffused with Sonoran culture, bringing a unique blend of sights, sounds, smells, and traditions to an already singular region. Here in the Madrean Sky Islands, the most ecologically diverse zone in the world, craggy peaks stretch to 9,000 feet above sea level, encompassing ecosystems from low, arid deserts to snowy, pine-knotted subalpine. We planned to pedal through it all, or at least as much of it as the short winter days would allow.

We rolled into the frigid air at sunrise, trying to outpace the looming edge of a rare low-pressure system moving down across the Sonoran Desert. Rain in the desert wasn’t part of the plan for our big ride, but the twisting purple clouds made for unusually baroque scenery as we crested the “Boom Shaka Laka” hill, a name coined by Heidi herself. The story goes that Heidi and Zander first came down to check out the area unsure of what they would find, but with high hopes for gravel and cycling camp potential. When they reached this hill at the intersection of Harshaw Creek and Apache, the entire valley unfolded before them, providing views of Mexico, Montezuma Pass, Canelo, and the rest of the Madrean Sky Islands – the terrain that would eventually become the Spirit World 100 course. Boom Shaka Laka. They had found it. 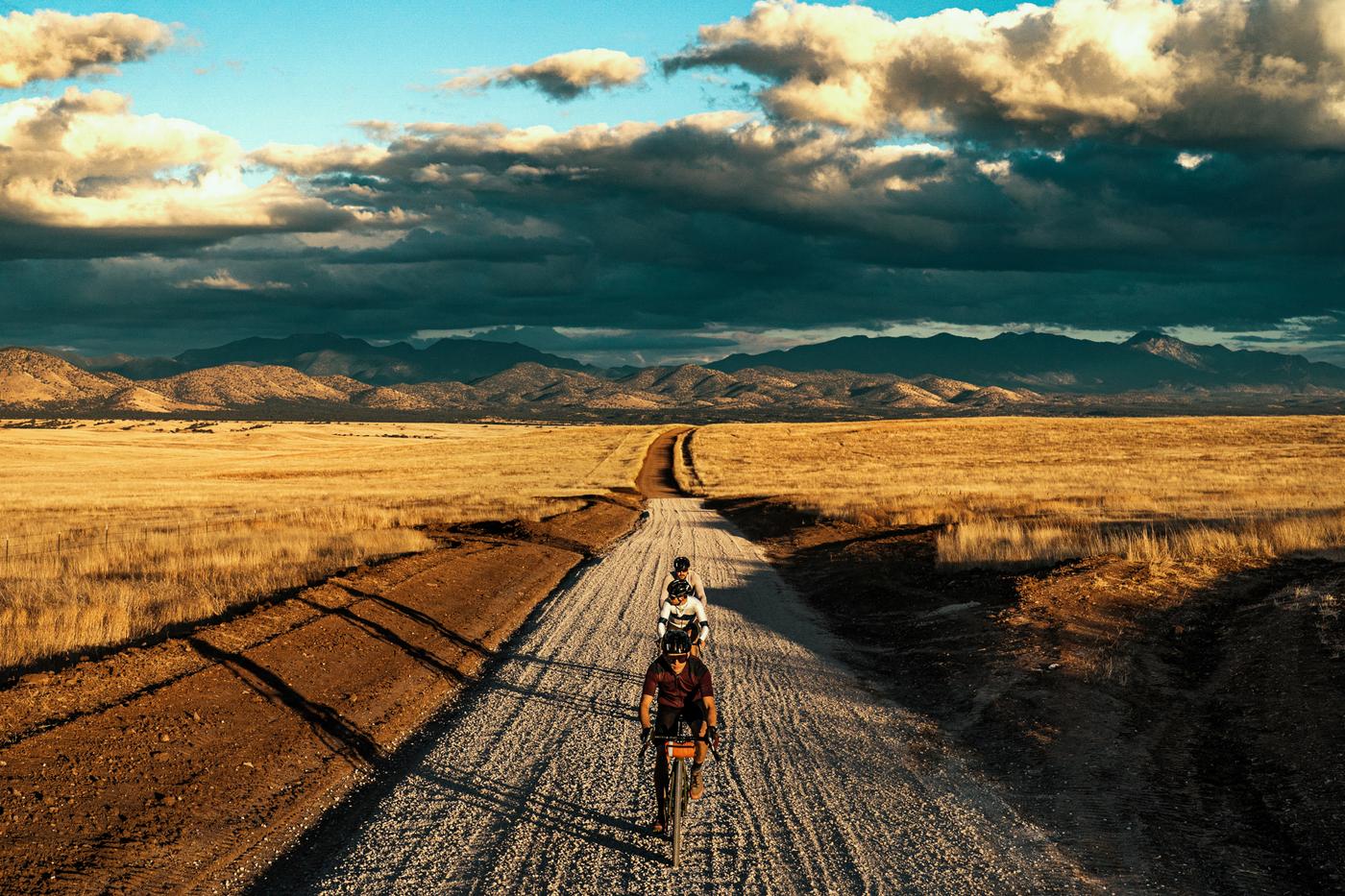 Wind-driven rain pelted us in the rolling ranchlands near Lochiel, a small outpost mere yards from the border. As iPhone alerts welcomed us to Mexico, we rounded the sandy turn that would point us north toward Patagonia, but not too easily – we’d have to climb twisting, rocky gravel up towards Duquesne before a screaming descent into town. Here, the terrain provided the entire spectrum of the regional offerings: white sands, freshly-grated gravel, steep climbs, and run-ins with unique characters; this time around, we stopped to chat with Larry Mills and Ron from Nebraska, hauling a trailer full of hunting dogs and making a stop en route to their favorite quail haunt to check on the widow of an old friend. We saw them later at the Patagonia Lumber Company, sharing a drink and talking about life over long years. The small threads of joy and community weave together seamlessly here in the borderlands, proving to me something I’ve always known: bikes are a context for movement and connection, a rolling vehicle to break from the normal and tap into something more important. It’s not the bike that’s important – it’s the people.

The previous night had found us at Rocking Chair Ranch, a small, family-owned operation sometimes isolated from town by the high flood waters of monsoon season. I’d befriended the owner, Jay, and ranch manager, Terry, on my previous trip to the area, and they invited our whole crew out for a gathering. We showed up with pizzas from Velvet Elvis and sat around the raging bonfire on milk crates and camp chairs. After the pizza and pleasantries, Terry began to talk, sharing stories of her work in the borderlands. Terry and her crew perform a very special type of service in the region, an act both tenderly humanitarian and ultimately Sisyphean. Of the many asylum-seekers who cross through the region on foot, some never make it to their new lives. With nothing to lose and the promise of everything to gain, they pay “Coyotes” inflated sums to smuggle them through the borderlands, moving from vehicle to foot travel and donning carpet-bottomed shoes to move untracked through the cold desert. 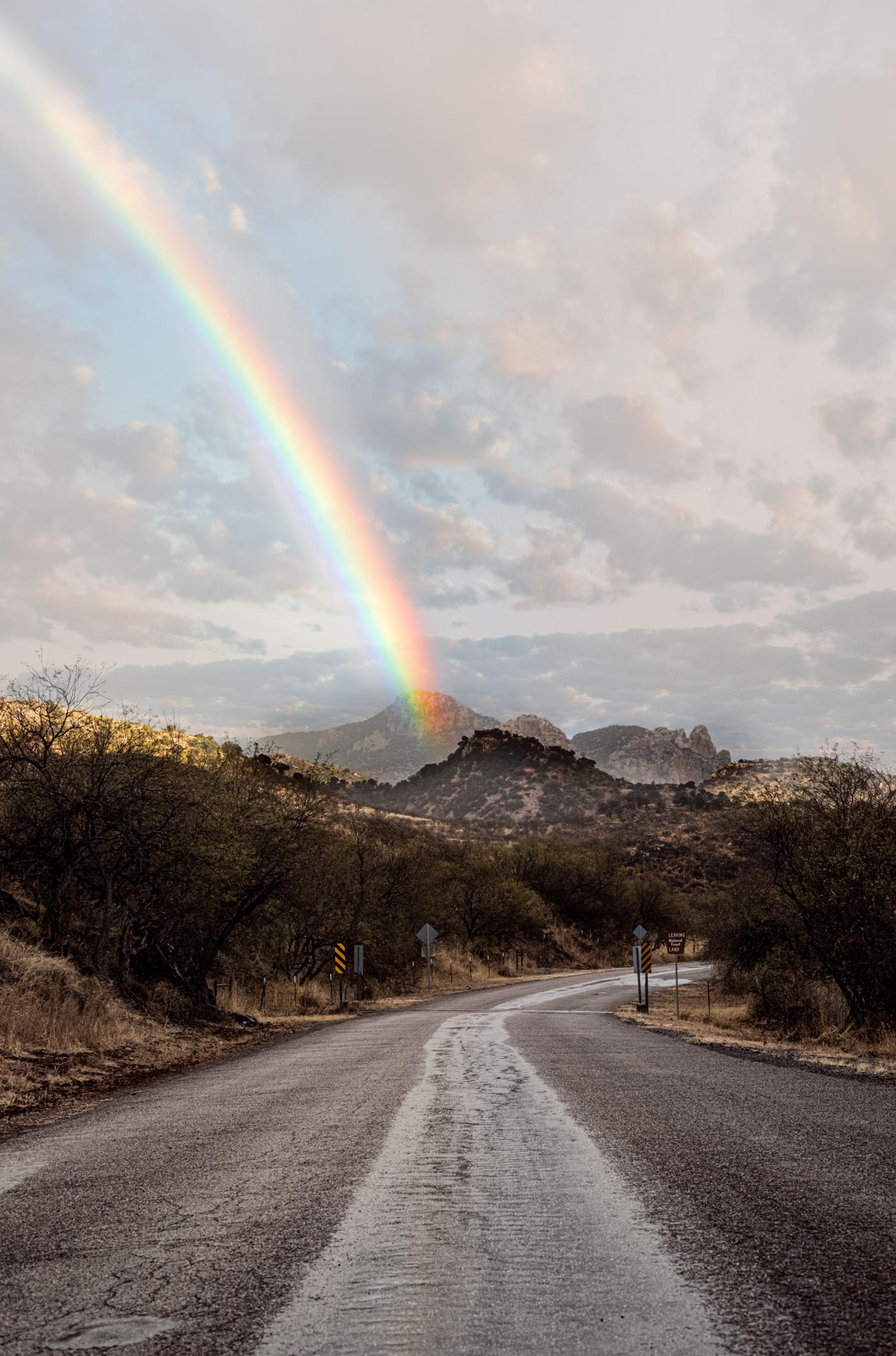 Then it goes wrong. Some are robbed or abandoned by the Coyotes, or lose their group in the fear-soaked madness of a brush with Border Patrol. Some run out of water or food, and are found crawling through the desert ripped by cacti and baked by sun; these “lucky ones” are given medical care and deported. Some of these dreamers end their journey alone, thirsty and tired and empty; these are the people honored by Terry, who with her team rides out into the harsh borderlands with one purpose: plant a cross at the death site of each of the fallen, honoring their hearts and the sacrifice of their bodies in pursuit of a better life. It’s a small act made unimaginably big by the care and love of Terry’s team. Like all of life, the borderlands are a balance and a paradox – how can you hold in your hand something with so much pain and beauty inseparably bound? 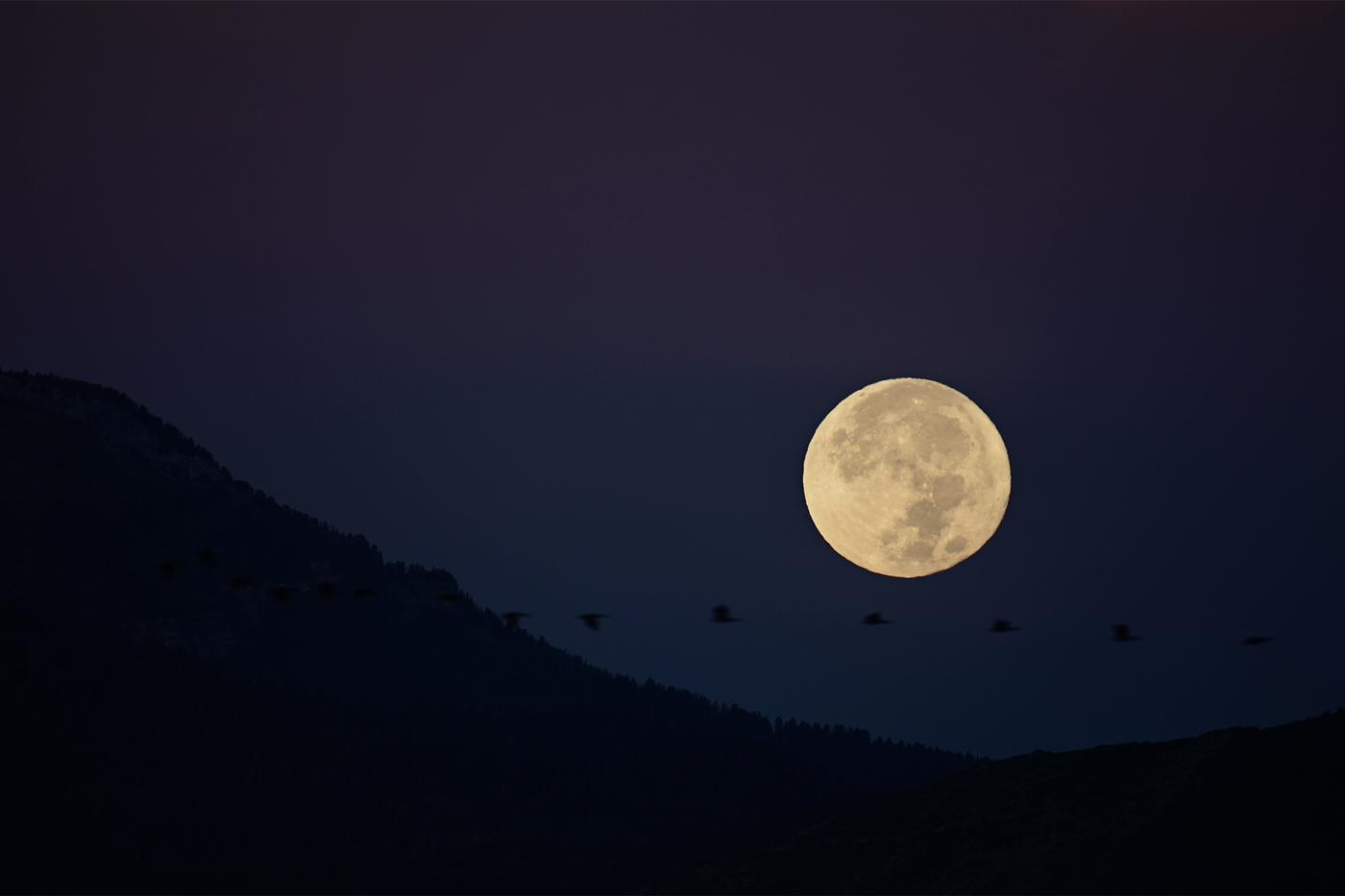 We finished the ride into a headwind, as seems to be tradition in the San Rafael Valley; “Teeth to the wind,” is, after all, the official slogan of the Spirit World 100. We celebrated in the usual fashion: cold drinks, live music, and friendly faces at the PLC, followed by a late-night at the town’s best and only saloon, the taxidermied wonderland called, what else, the Wagon Wheel. Banquet and rye greased the wheels of the locals, and we spent the last bit of our 72 hours in the company of folks I can only describe as real, a rare quality indeed. 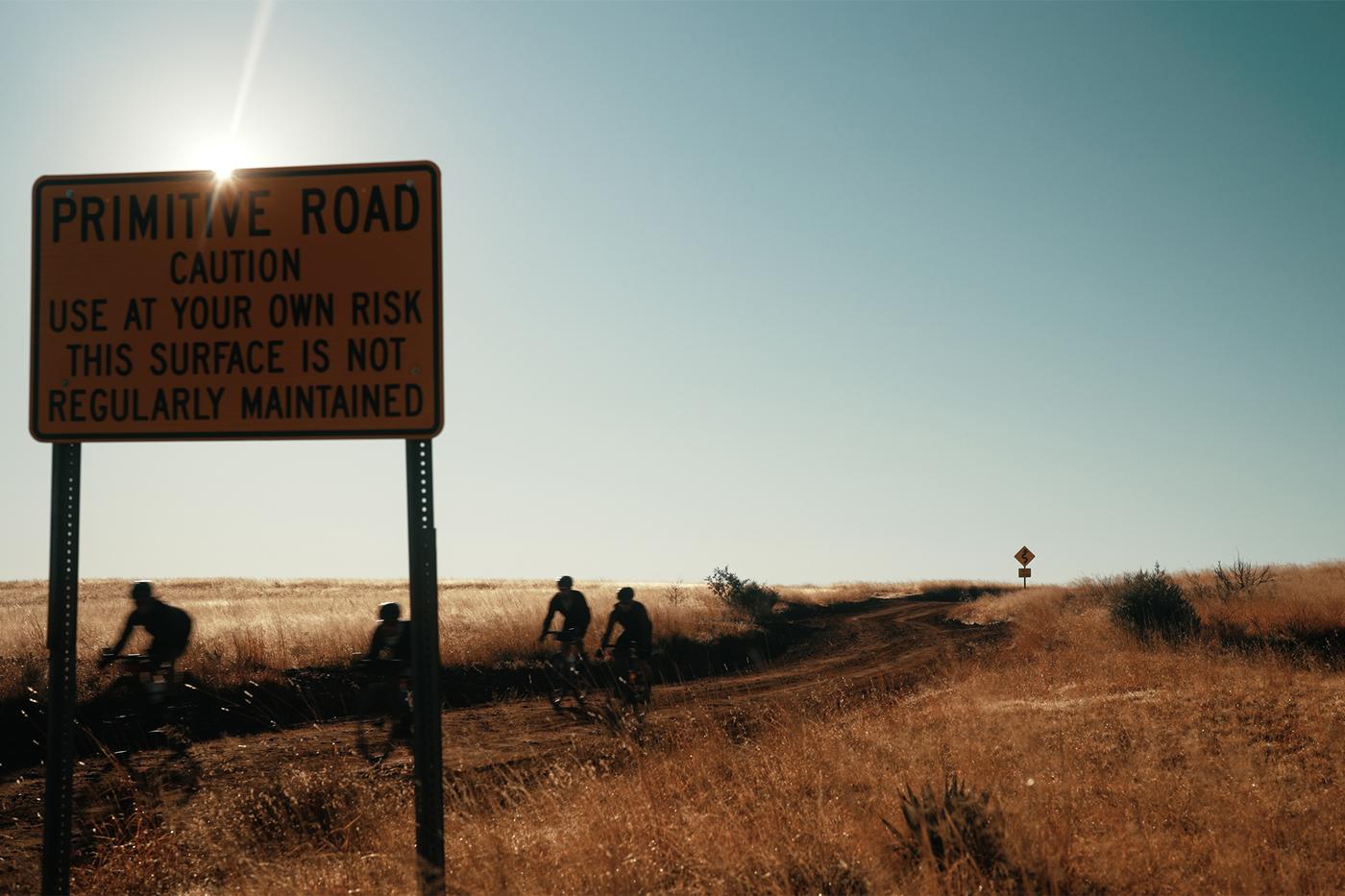 The night wore on and my head got louder, the thread weaving itself into a loop as I reflected back on my sit-down interview with Zander on day 2; our encounters with friendly local cyclists; Mike, who bought the ranch land his father once crossed on foot; the old church sitting open and empty next to Red Mountain Foods, Patagonia’s cash-only grocery store; coffee on a perfect morning, one of the small joys of life I hope to never lose; bonfire sparks trailing into a sky so rich with stars here in this unpolluted corner of earth; friends and long miles into a shimmering horizon. That night, I sat down and wrote a letter.

It was another perfect morning in Patagonia, and we shared coffee before the interview, squared off like bull and matador on stools digging themselves into the sand. I wasn’t sure what the story would hold, how much of yourself you’d be willing to share; after all, we are new friends, and my ilk is part of the change coming to your special region of the world. Then, you began to talk, and I watched the light flashing in your eyes as you described this place, these people, this life you and Heidi have chosen. You shared how the two of you first arrived here, riding your bikes to the magnificent overlook and watching the valley unfold before you, replete with gravel roads and mysteries innumerable. You shared your leap into this small town near the Mexican border, slowly at first and then completely, relocating your business and making a home here, starting the Gravel House, Patagonia Lumber Co., and The Spirit World 100 – all arms of the same unique beast. You shared your idea of this region as a blank canvas, and that you’d do your very best to be an artist worth holding a paintbrush to it.

Sitting across from you, holding my empty cup, the strangest feeling washed over me, slithering in at first vague and elusive, then clear and proud. I realized that talking with you was, in a sense, akin to looking in a mirror, one that projected me 10 years forward if I were brave enough to continue following my heart. I loved what I saw in the mirror, our shared struggle with sitting still and straightening up and doing what the world wants us to. No, never that – that’s death in another form. In the mirror, I saw life.

Looking at my future, I realized that Patagonia, the San Rafael Valley, the Coronado, the Arizona Borderlands – these weren’t the only blank canvases. Each time I mounted my bike, or stepped across the threshold of Patagonia Lumber Co., or cooked a meal with my best friends in the just-like-home kitchen of the Gravel House. Each time I encountered a new friendly face and a perfect slice of pie at Gathering Grounds, or ate another scorched-chili breakfast burrito at El Pancho Villa, or sat by the bonfire at Rocking Chair Ranch, listening to stories of carpet shoes and crosses and… how the hell did I get so lucky with my life?

Every time, I had the realization that I, too, am a blank canvas, being painted and lovingly crafted by the beautiful thing you and Heidi have created, colors spilling from the landscape itself and weaving themselves into the fabric of my story.

To many more mountains, 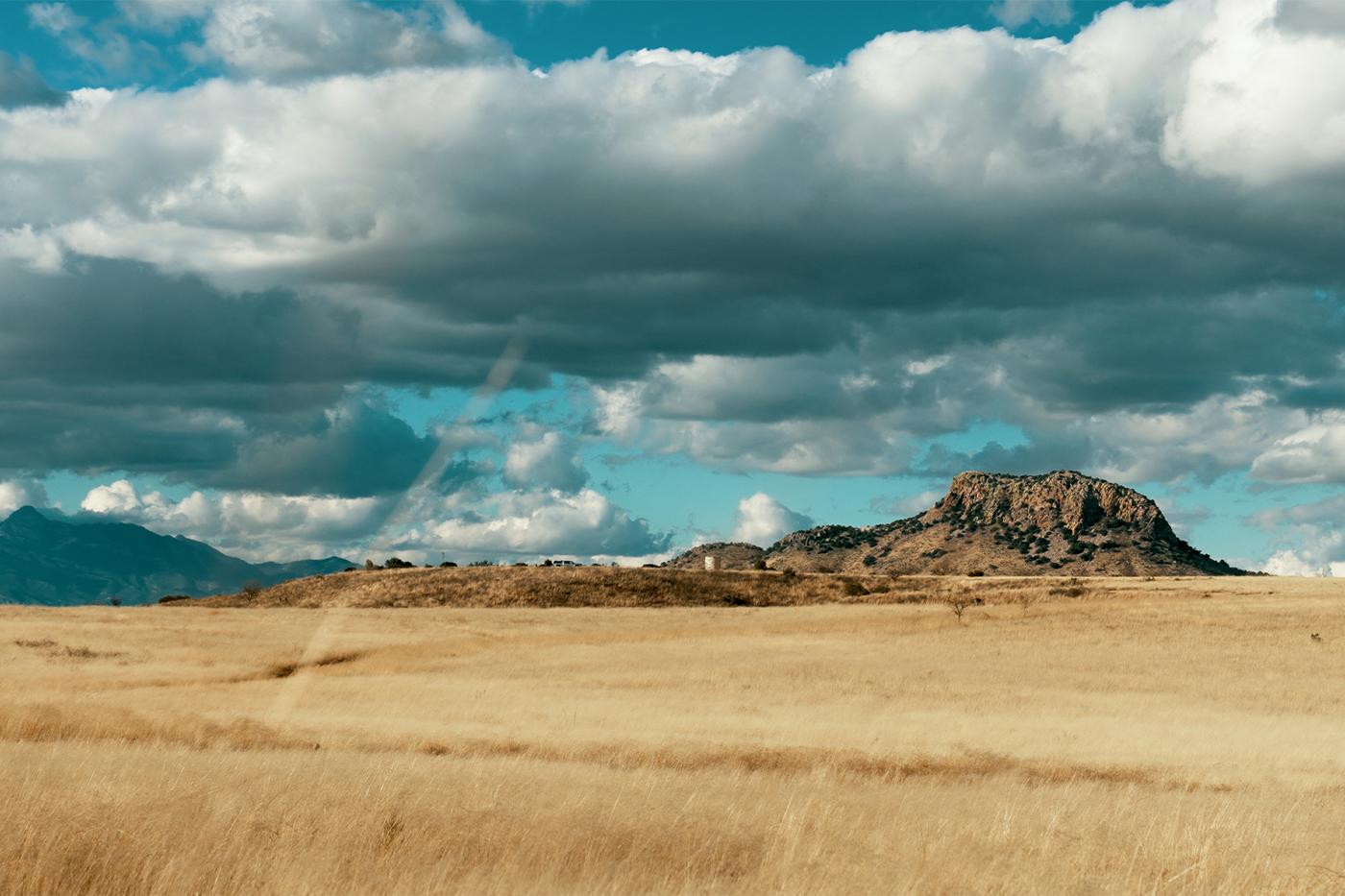 The next morning, we road-tripped back to Colorado, 15 hours across the wide-open lands of the American Southwest, the mountains and deserts and plains merging to a single point on the far horizon. I settled into sleep as we traversed across the land, dreaming a moving love letter to a place at once desolate, remote, empty, full, and free.